So what is Yoga? An attempt to attain spiritual enlightenment through bending the body into a series of increasingly uncomfortable positions? A great way of building strength and flexibility, toning the body and losing weight? A form of meditation where moving the body through various postures is used as a tool to increase focus and concentration?

In fact none of these explanations are correct. Yoga, as developed over 2500 years ago in India, actually had nothing to do with the various postures we see today (which were developed much later to help prepare the body for long periods of meditation). Yoga is in fact an incredibly powerful practice designed to strike right to the heart of the human condition – aiming to eradicate all forms of suffering. Today it is just as relevant as it was in ancient India, and it has enormous potential to transform our lives.

The word Yoga literally means “Union” – it can be thought of as a way of bringing the body and mind into union, or on a deeper level brining us into union with the true nature of reality. Many of us feel that we are in a state of disharmony, that we have the potential to be much better than we are physically and mentally. Yogic practices aim to allow us to realise our full potential by bringing us into a harmonious state.

Can We Ever Be Satisfied?

The concept of discomfort as described by various Eastern traditions is not something just experienced by the sick or unfortunate, it is in fact a universal experience shared by all embodied beings.

We may be experiencing the pleasure of eating an ice-cream, but sooner or later the experience will be finished. Even while we are enjoying the experience, a part of us knows it will be over soon – making it hard for us to experience it fully. Often our desires bring us into conflict with ourselves: we know a certain type of food is unhealthy, but we keep on eating it. Many people develop destructive addictions. All of the things that bring us pleasure are temporary, we know this yet we are unable to break the cycle. In our modern society we can see this time and time again: we think the new job, new partner, new house etc. is going to change everything but when we get the object of our desire, before long we return to an unsatisfied state again. We are constantly bombarded by advertisements, expertly designed to increase our desires, fuelling our sense of dissatisfaction. On a more fundamental level, life can sometimes seem meaningless and filled with conflict; we strive to achieve many things but we know that ultimately we will lose everything.

In many Eastern traditions, this everyday reality we are experiencing now is seen as an illusion – something dreamlike and temporary. It is our belief that this illusion is real and permanent that creates suffering. It may sound like an unusual perspective to see the world this way, but it is not incompatible with modern scientific thought. For example when you look at a red flower, we now know that the colour red is created in the brain based on the wavelength of the light reflected from the flower. In this way all experience is created by the mind. We know that the planet is spinning yet we perceive it as motionless, we know everything is made up of tiny atoms which mostly contain empty space but we perceive things as solid.

Lost In Our Thoughts

While the illusions created by the mind are often useful to us (we could not survive if we perceived the spinning of the globe etc.) in some cases our minds can completely deceive us. Take the example of an attractive person who believes they are ugly: they may spend huge amounts of money and time attempting to change their external appearance, people may pay them compliments, but none of this changes their negative self-perception. We have all experienced times when the stories created by our thoughts turn out to be totally different from reality. One good example of the way thoughts can bring us away from reality is the concept of “beginners luck”; a person may succeed at a task they have never done before the first time they try it, but then afterwards they fail. This is because the first time around they were not thinking about it so were able to focus fully. Often optimal performance occurs when thinking stops – many people report this: from musicians to mountain climbers.

Unfortunately, in our modern society, we are not trained to stop our thoughts – it is the opposite in fact. We are conditioned to be constantly planning for the future: from a very early age we are put under pressure to think in a very specific way, focusing on problem-solving and assimilating large amounts of information. The education system and many jobs force us into this way of thinking. We do not even have time to question this as we are often too busy!

In the same way that we identify with external objects, we become attached to our thoughts. Maybe we will daydream about a situation in which we are happier, which will bring us away from the present moment. Or if we depressed we may replay uncomfortable events from our past again and again, making us feel even worse. It does not matter if the thoughts are positive or negative; they have the same effect of taking us further and further from the present moment, deeper and deeper into the realm of illusion.

Even the bodily sensations we feel are aspects of the mind. When a person loses a limb, often they can still feel its presence – in fact this is essential for prosthetic limbs to work. Sensations in our body feel very real to us, but by training the mind it is possible to change them. A person meditating may initially feel a lot of pain and tension, but many report that by focusing on the pain they can remove or totally transform the sensation. As we grow up and grow old, the body changes – yet somehow we feel it is the same. After 7 years, every single cell in the body is replaced but we remain totally unaware of this process, experiencing our body as a single coherent object. We know that our body will eventually die, but often we live as if it will last forever.

So we may identify with external objects which do not bring us lasting happiness, or with our thoughts which may deceive us, or with our body which can bring us pain and will not last forever. Yoga attempts to bring us out of this illusionary condition, which if you think about it is a pretty huge ambition, far more significant than simply creating a more flexible body!

Losing our attachment to external objects, thoughts and bodily sensations may sound like frightening prospect, and it seem depressing to imagine giving up the things that give us joy. But in reality, Yoga brings us more happiness. It is not about giving things up, but bringing them under our control. When we are no longer slaves to our thoughts, bodies, and external objects, we are able to return to an optimal state of being.

On one level, Yoga brings our mind and body into a state of union. On a deeper level we can be brought into union with absolutely everything. Many Yogis have reported entering states of pure bliss when there is no longer any distinction between themselves and the outside world.

The Development of Yoga

Early practitioners of Yoga often went to extreme lengths to liberate themselves from everyday reality. Fasting to nearly the point of starvation, meditating in exceptionally uncomfortable positions for days at a time, giving up all worldly possessions, and other forms of self-denial were commonplace. While these extreme aesthetic practices are still practised in some parts of the world, the type of Yoga most of us practice today is based on much gentler approach.

The Yoga Sutra (written around 1700 years ago by the mysterious sage Patanjali) has been hugely influential in forming the type of Yoga we practice today. Patanjali defines Yoga as “Stopping the waves of consciousness”, the process of freeing ourselves from the illusionary, unsatisfactory world in which we find ourselves.

The Eight Limbs of Yoga

1) Yama – This relates to how we act in society and advocates treating others with respect and kindness.

2) Niyama – This covers how we should act with ourselves and explains that we should develop spiritual practices.

3) Asana – Literally meaning “to sit” this relates to the postures practiced in Yoga. Rather than placing our body under stress with extreme practices, the Yoga Sutra advocates treating the body as the vehicle which can carry us on the spiritual path, so it should be respected; Patanjali states that, ““Unnecessary suffering must be avoided.”

4) Pranayama – this relates to control of the breath, which is considered the most important form of bodily energy in the Yogic tradition.

5) Pratyahara -this relates to control of sensory information, gaining self-control by reducing our attachment to external things and bringing the attention inward.

6) Dharana – once we have control of the senses, the next step is to overcome mental distractions. This stage is the preparation for meditation and involves focusing the mind on a single point of concentration.

7) Dhyana – this is the stage of meditation, when we are fully concentrated and unaffected by external or internal distractions.

8) Samadhi – This is the ultimate goal of all Yogic practice, the state of pure unity, where all distinctions disappear. This state of being is beyond any verbal description but words like “bliss” and “peace” are often used to point toward this ultimate aim.

Much More Than Just The Postures

Many people associate Yoga with the postures; however this is just one of the 8 Limbs as given by Patanjali.
The Yoga postures we practice today were actually developed to allow the body to be more comfortable during meditation. By using postures to prepare the body, it is possible to go much deeper into the practices, and many were developed to facilitate breath control. In the West we have many habits that give us bad posture and compromise our breathing, so these types of practices are particularly important.

Modern Yoga classes often only promote Yoga as means of getting fit, or in some cases a form of meditation, but it is rare that Yoga is described in its original form. Our Western mind-set may often cause us to see Yoga as a means of simply increasing our physical attractiveness or proving our skills to other people, but this will actually bring us more attachments – the opposite of what Yoga was intended for!

Practising Yoga will give you a healthier body. It may make you more attractive and even give you cool pictures to put on Facebook! But we should realise that Yoga can do much more than this. Yoga can bring us to an optimal state of being in our daily lives, where the mind and body work in harmony and we are not at the mercy of our thoughts or external pressures. At in its deepest sense Yoga can do much more than even this: it can bring us to as state of true union where there is no suffering.

At the Vagabond Temple in Cambodia we provide regular Yoga practice using a variety of styles as part of our Yoga and Meditation Retreat. We also have talks on the history and meaning of Yoga, and invite our students to experience this powerful practice in the way it was originally intended to be used.

A Recipe for Banana Birthday Cake 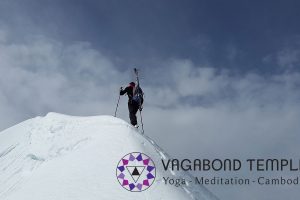 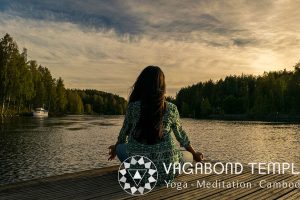 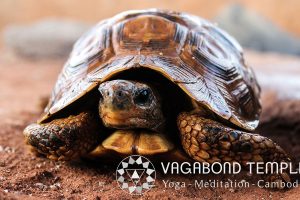